Editor’s note: In honor of International Women’s Day, we’ll be rolling out a week’s worth of stories — one each day from March 8-14 — that celebrate and showcase contributions women have made to the sport, lifestyle and culture of surfing. (And yeah: we’ll continue to do so in the weeks and months ahead.) Here’s an excerpt from Lauren Hill’s book, She Surf.

With roots entwined amongst the royalty of Ancient Polynesia, surfing has been called The Sport of Kings. But to use this name alone is to deny the full and rightful history of the art of riding waves. It has always also been The Sport of Queens.

Surfing has been part of Hawaiian culture since the fourth century when Polynesians settled the islands and brought wave riding with them. In pre-contact Hawaii, surfing was for everyone; mothers, grandfathers, warriors, princesses, children. In fact, historians of Ancient Polynesia acknowledge that it was women who seemed to stand in the highest regard for their skill, grace and poise as surfers. Woven deep into the chants and lore of our surfing culture’s roots are the stories of revered women who rode waves with utmost grace and athleticism.

Surfing was of such value to early Hawaiians that it was forbidden to work or war during prime surf season – everyone took a full three months off over winter for social bonding via play and playful competition — called The Makahiki Festival. The ecological abundance of the Hawaiian islands meant food was easily accessed, and so leisure was also abundant. 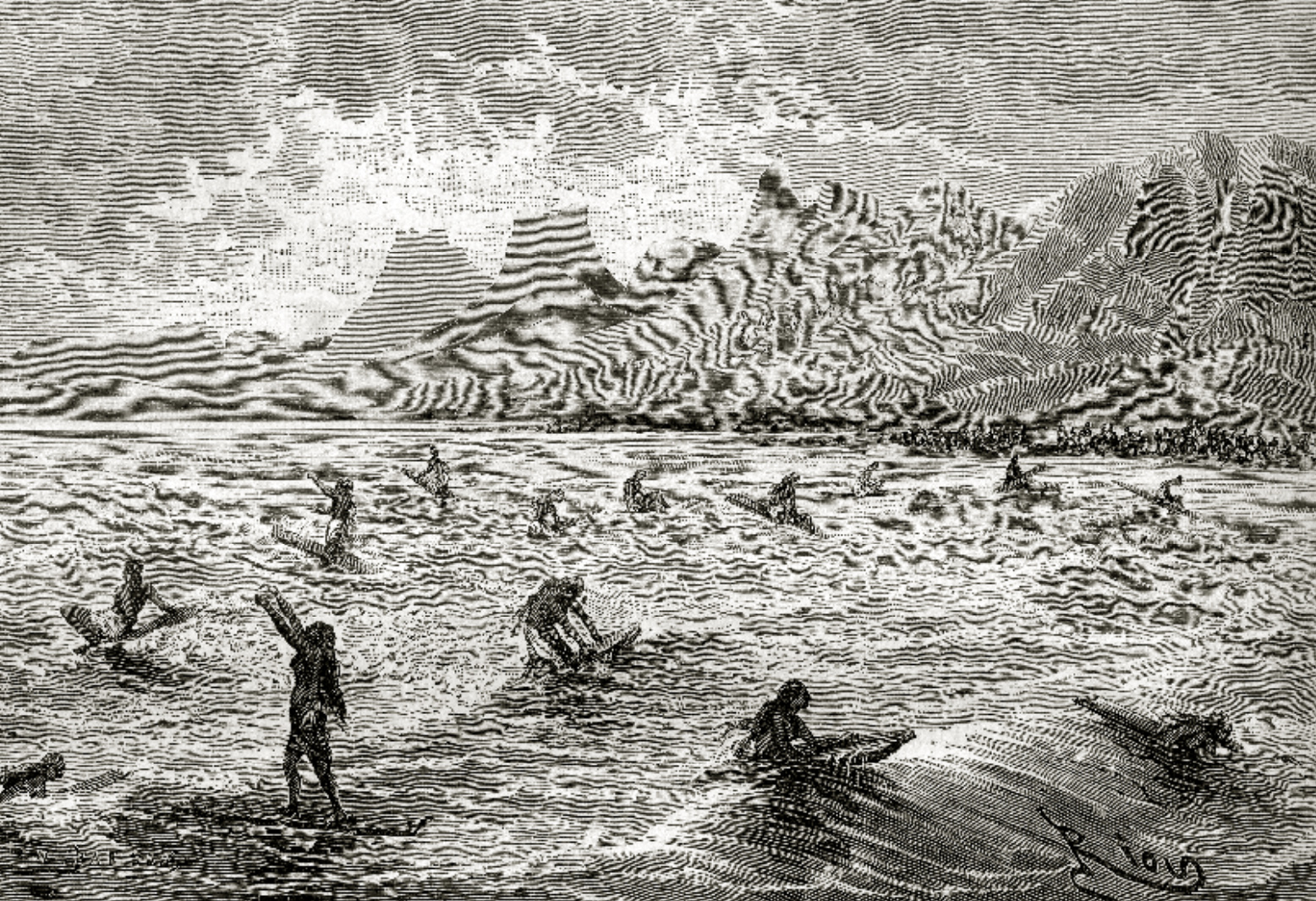 Back then, people knew what we have forgotten; that play is part of what makes us human. That working too hard or too often doesn’t necessarily lead to increased productivity or happiness or a sense of community. Play has been an essential part of human evolution because it opens up doors to creativity, spontaneity, and envisioning new ways of being in the world. Most human cultures have tended to have more leisure time than work.

Though wave riding may have predated pre-contact Hawaiian culture elsewhere, Hawaii is recognized as the edified, spiritual home of modern surf culture. He’e Nalu, or wave sliding, was an integral aspect of Hawaiian life before European colonization. Surfing played a role in romance, ceremony and spiritual practice. A man and woman riding a wave together was considered flirting, and often translated to relations back on land. Hawaiian myth and lore make surfing inexorable from spiritual life, even deities surfed.

In pre-contact Hawaii heiau, or temples, were constructed throughout the Islands in dedication to various essential aspects of life: healing, growing, rain, safe voyaging, It is thought that some heiau were even dedicated to surfing. These temples were built atop bluffs for waveriders to contemplatively watch the surf below and pray for favorable conditions.

According to myth, Goddess Pele of volcanoes is referenced as one of the earliest surfers. She was taught by Kamohaoli’I, aumakua (guardian) shark god, subsequently taught her youngest sister-goddess Hi’iaka and men followed after. 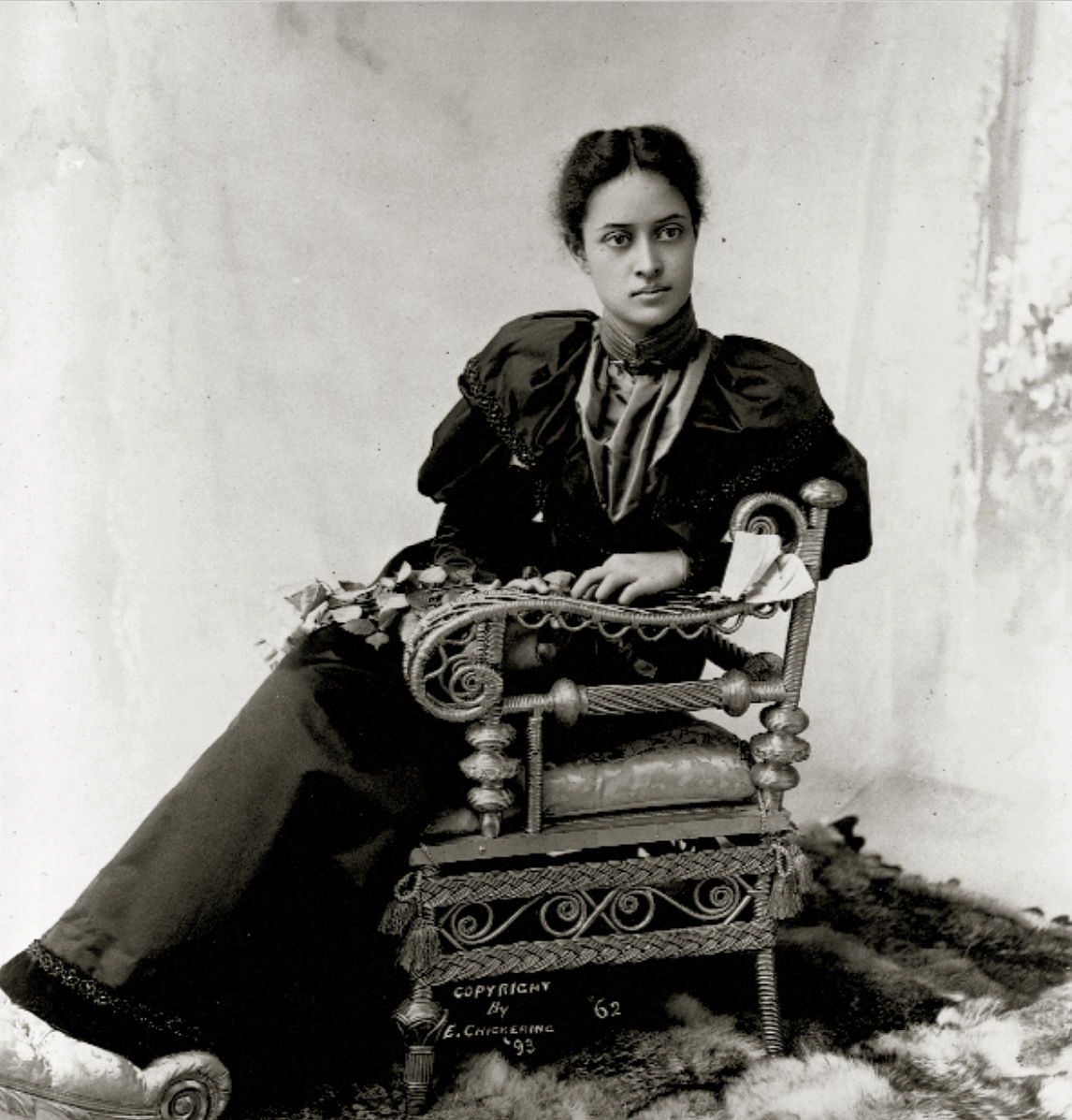 In one myth, Hiʻiaka, goddess of hula, chanting, and medicine, is charged by Pele to a treacherous journey through the Islands to find Pele’s favored chief Lohi’au. Upon her arrival, Hi’iaka discovers that Lohi’au has died, possibly from grief in Pele’s absence. She temporarily chants and sings life back into him, but knows that the only way to permanently resuscitate him is to take him surfing. As referenced in Ian ʻAkahi Masterson’s Heʻe Wahine I Ka Lani: Goddess in the Surf:

“As they rose upon the wave, the dorsals of the giant fishes of the sea surged up and down on that same billow that they climbed. Hiʻiaka stood upon the surface of the water with her skirt of pahapaha seaweed and mōkila grass fluttering behind her. And Lohiʻau tried out every possible surfing stance, each of which he could perform with ease… Nothing could compare to the beauty of this surfing…”

Goddess Hiʻiaka, in all her skill with the healing arts, knew that riding waves was the perfect medicine for a broken heart.

In Hawaiian myth, mortals and supernatural beings regularly intermingle. Such was the case with Mamala, a surfing kapua, or shape-shifter, who transformed from beautiful woman to a great shark, or a gigantic lizard. In one tale, Mamala is caught in a love triangle between another kapua and a chief. The story does not end well for the male kapua, but what is abundantly documented in the myth is Mamala’s great athleticism. She was known for dancing upon even the biggest surf with skill and allegedly loved the wild, windy waves whipped up within the bay of Kou (modern day Honolulu Harbor). The ocean West of Waikiki is named in her honor: Ke-kai-o- Mamala (the Sea of Mamala). 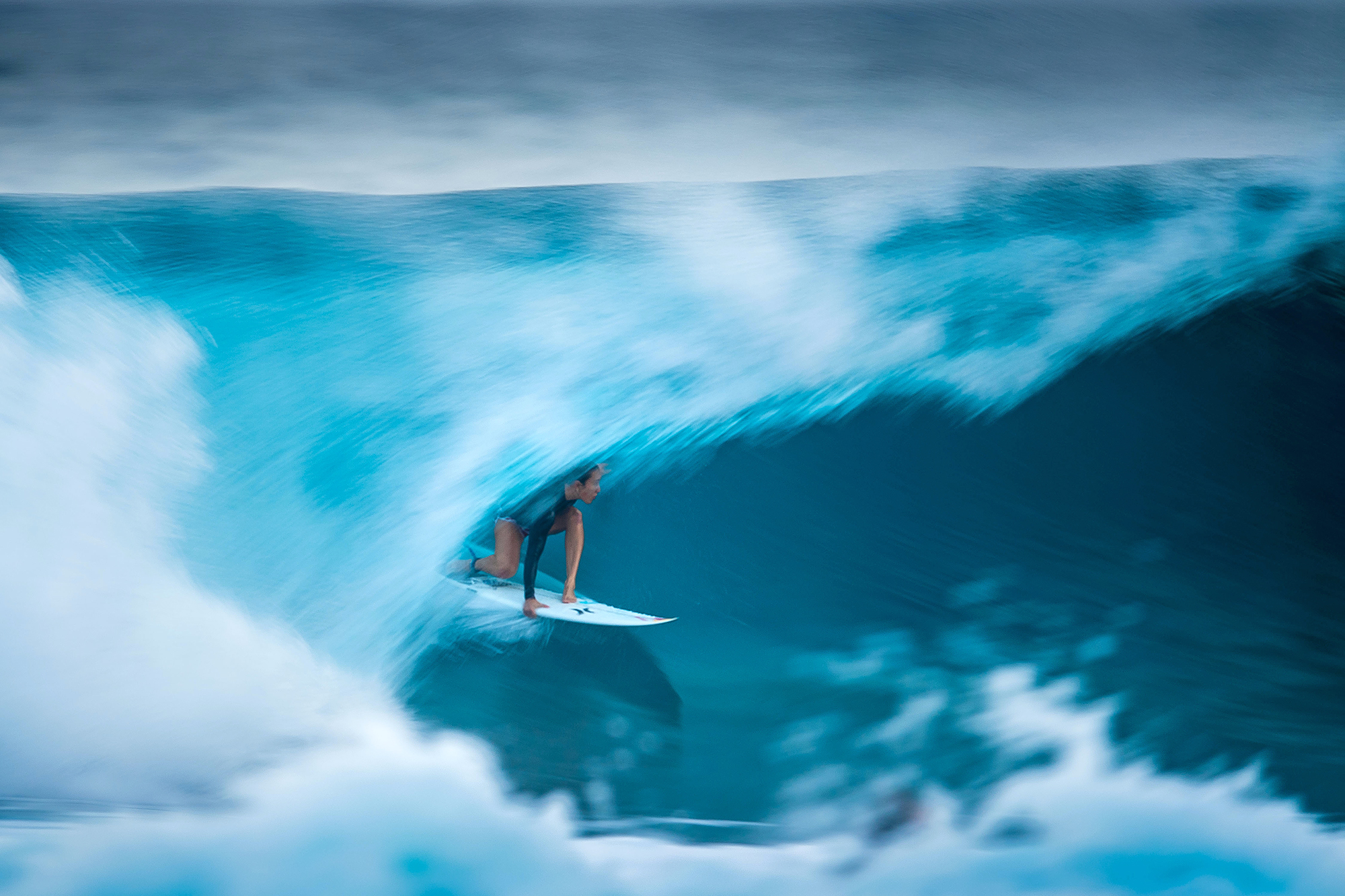 On the island of Hawai’i, during the ancient times of the gods and goddesses, Punahoa was a revered surfing chiefess. One epic tale recounts the time when her surfing skill was challenged by a group of men. She was celebrated for never losing her board and asserting her confidence in the water, with her surfing surpassed only by the supreme skill of goddess Hiʻiaka.

As Hi’iaka’s lore has reminded many generations, Polynesian healers were well aware of surfing’s ability to be deeply reviving to the human spirit. Some time around 400 A.D., four wave-worshipping Tahitian healers known as kāhuna or mystics, travelled to Hawaii and became renowned for their curative magic: Kahaloa, Kinohi, Kapuni and Kapaemahu. The four kahuna were māhū, meaning “in the middle,” and represented the third gender as men who identified and lived as women. They mixed the girthy stature of Polynesian men with the grace of Polynesian women, and must have been beautifully skilled surfers.

The kāhuna knew that they would eventually return to Tahitian shores, but wanted to leave a lasting legacy in Hawai’i. Besides performing many miracles of healing, the kāhuna enlisted thousands of their followers to transport four mammoth stones – each weighing more than a ton – from the highlands to rest near the coast. 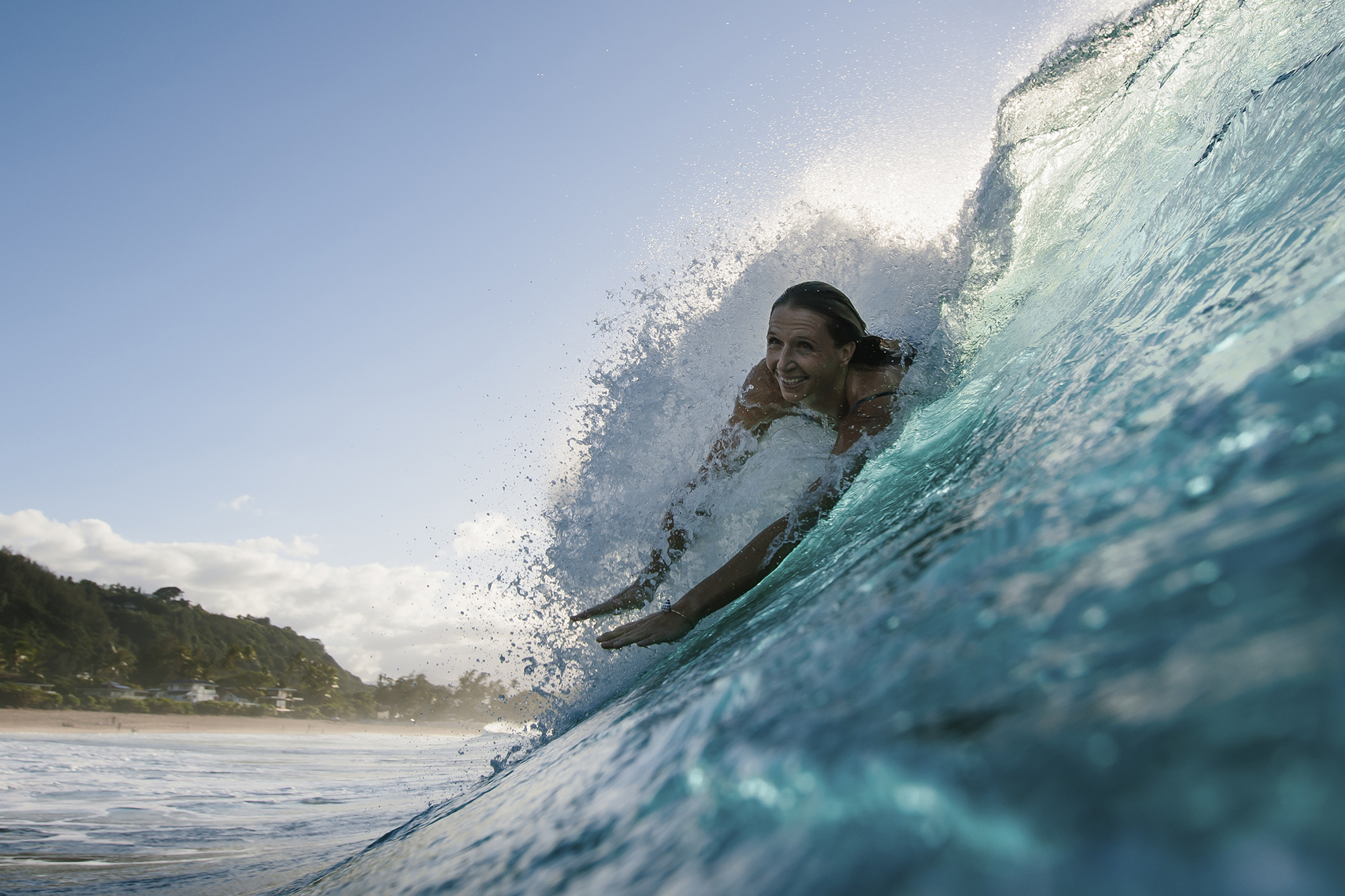 Today in the heart of Waikīkī, lay four gated stones, Nā Pōhaku Ola Kapaemāhū a Kapuni, or “The Stones of Life,” associated with those four magical māhū kāhuna. The stones are charged with their healing mana. A section of beach and a stretch of Waikiki surf is named in their honor.

The legend of the great surfing Princess Kelea, or Ali ’i Wahine Keleanohoana’api’api, circa 1445, depicts the reality across time and space of hōpūpū, or “surf fever,” the desperation of going too long without riding waves. Princess Kelea was known as the best surfer on Maui.

An O’ahu chief stole her away when he saw her beauty amongst the surf, provoked by the great skill and notoriety she might bring to his clan with her surfing prowess. Princess Kelea eventually married his cousin, a high ranking chief, and moved to their village in the uplands of O’ahu. Kelea birthed four children there, but eventually longed so deeply for the surf that she left her family to be with the ocean once again. When she returned to the ocean and rode a sweeping south swell at Kalehuawehe, she also rediscovered a former love interest, Kalamakua. He wrapped his cape around her as she stepped ashore, symbolic of the unity of marriage. They soon wed and gave birth to Lāʻieikawai, known as the most beautiful woman in all the islands. A happy ending for the surfer who stays true to her passions.

When European notions of religiosity and alternatively rigid gender divisions came to govern Polynesia and beyond, the wild freedom of wave riding was nearly lost completely, and later assumed as an endeavor only for men.

“By 1900,” legendary Olympic swimmer and surfer Duke Kahanamoku declared, “surfing had totally disappeared throughout the Islands, except for a few isolated spots… and even there only a handful of men took boards into the sea.” Christian missionaries’ puritanical distaste for pursuits like nearly-nude wave riding, where men and women mingled amongst the slippery sea, meant an environment not permissive of surfing. But even more significant was the decimation that came from infectious disease and the introduction of the cash economy that squashed Hawaiians once ample leisure time. With newly introduced sugar plantations to work, there was no time for surfing. 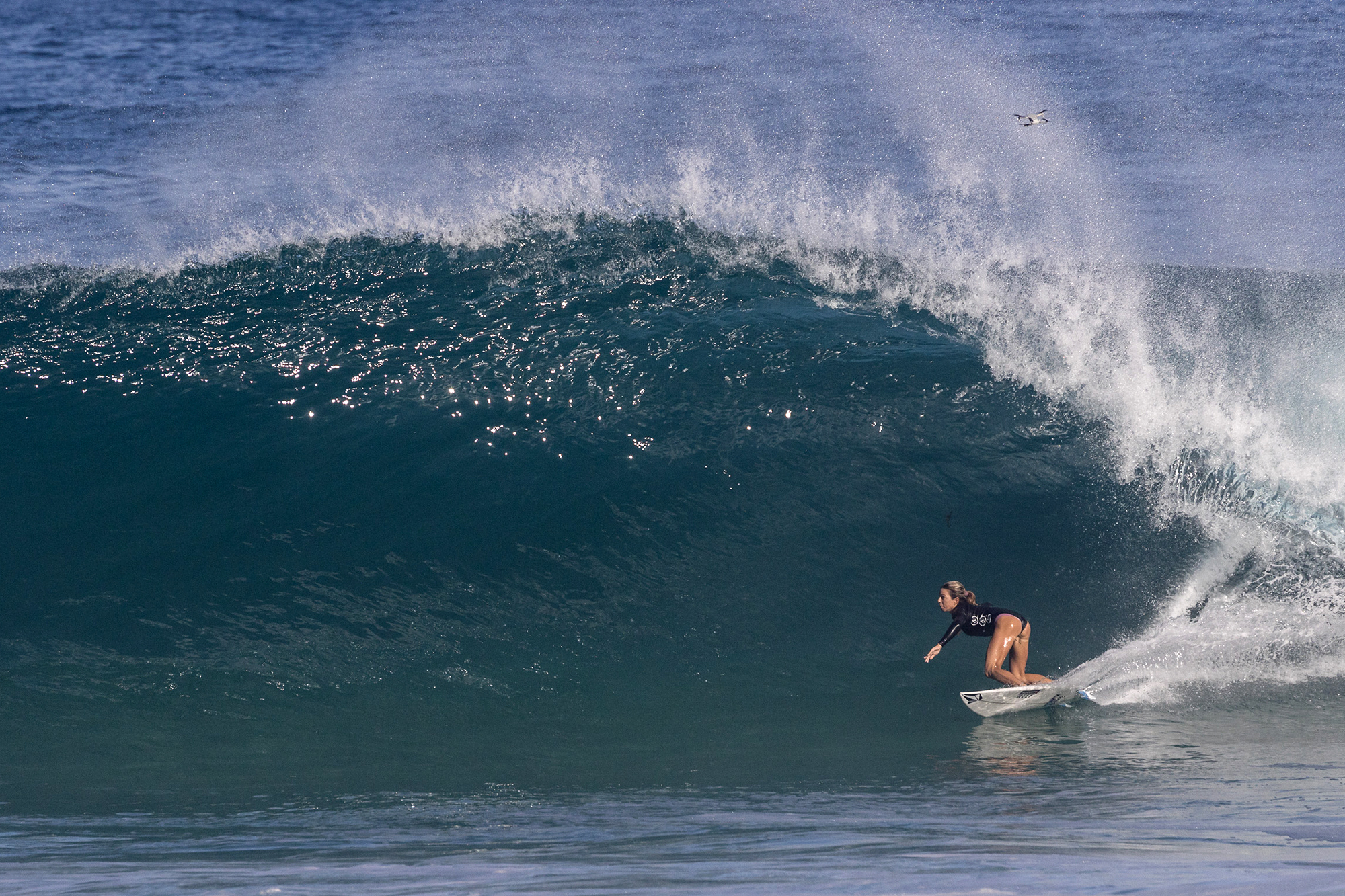 A notable exception was Princess Victoria Ka`iulaini,“an expert surfrider,” according to early Twentieth Century surfer Knute Cottrell. Princess Ka`iulaini surfed the olo, a long and exceptionally heavy board reserved for royalty. Hers was made from the wili wili tree. One cannot overestimate the skill, power and strength needed to successfully ride the olo.

Princess Ka’iulani, a half-Hawaiian, half-Scottish waterwoman, served as a brave liaison between the cultures she bridged and helped to keep the tradition of surfing alive amidst the radical changes of European colonization. At only 17, she played an active role in the preservation of Hawaiian culture during colonization.

Princess Ka’iulani is reputed to have taken surfing to England, where she rode waves in the English Channel and may have been the first woman to stand up surf in England. Despite her early death at age 23, Princess Ka’iulaini’s noble legacy of speaking truth to power is undeniable.

Before the threats of colonization, a culture rich in aquatic lore and myth abounded in Polynesia. Surfing was part of a rich and sensuous way of life, that included hula dancing, chanting, and outlets for play entwined with spirituality.

As made clear in Surfing, Sex, Genders and Sexualities, “The significance of females in surfing history may be all but lost in ‘modern’ history and practice, but… it is captured in oral histories of surfing goddesses (akua), chiefesses (ali’i), priestesses (kahuna), and shape-shifters (kupua).”

Pre-contact and old Hawaiian stories recount some of our legacy as female surfers, despite their omission from the dominant narrative of surfing legend and lore. The fact that skilled waveriders were crafted into Hawaiian mo’olelo, or myths and legends, is indicative of the reality of the inclusivity of early surfing cultures. A not so subtle reminder that riding waves is for everyone. 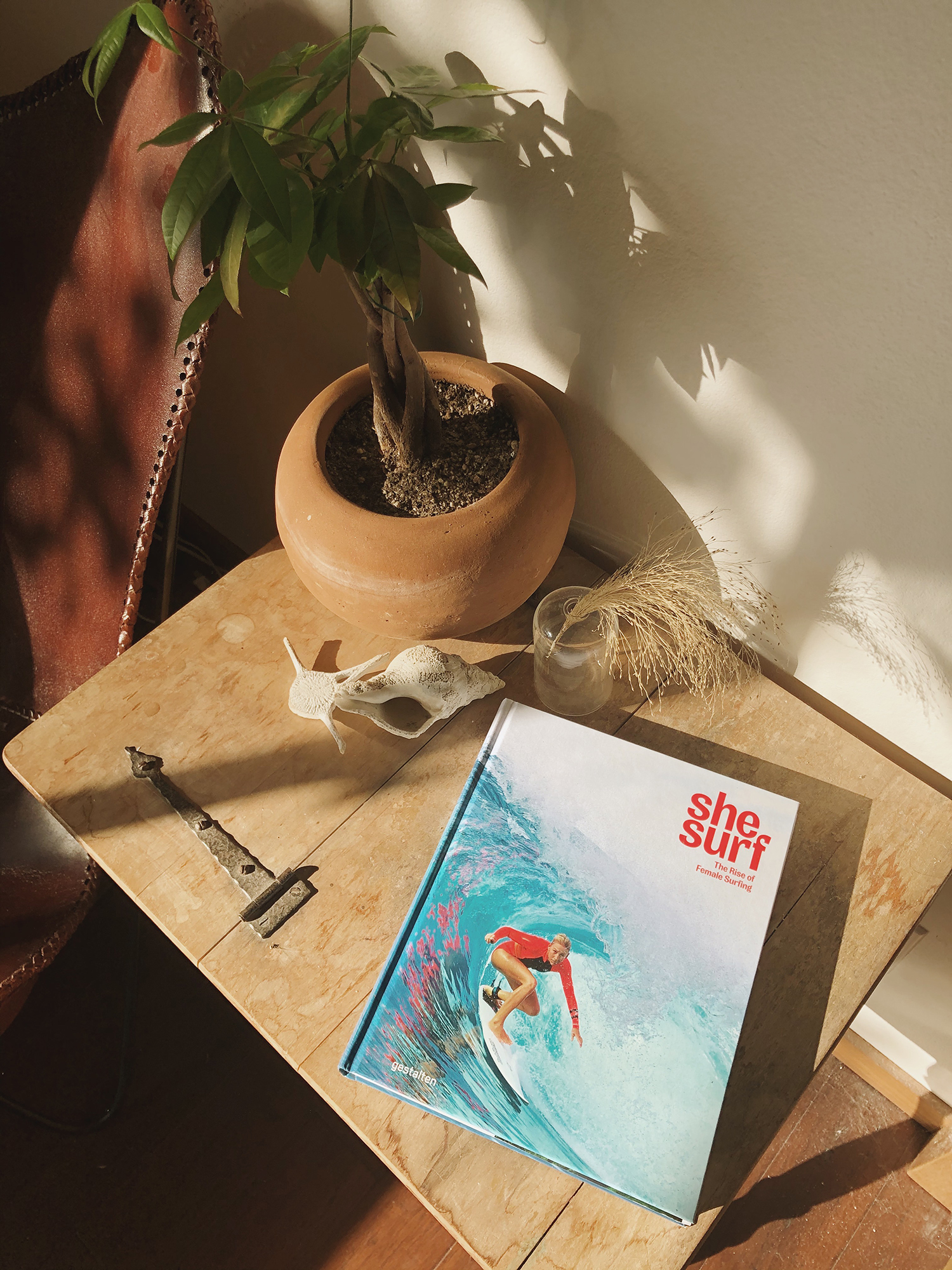 Surfing: An Illustrated History of the Coolest Sport of All Time, by Benjamin Marcus